Ok, 0 items were added to your cart. What's next?

The Washington Nationals advanced to the first World Series in franchise history by sweeping the St. Louis Cardinals in the 2019 NLCS. The Nationals qualified as a wild card team and defeated the Milwaukee Brewers in the wild card game. The Nationals then beat the Los Angeles Dodgers in 5 games in the NLDS to advance to the NLCS.

Major League Baseball has a long history in Washington D.C. that stretches all the way back to the old American Association in the late 18th century. The Washington Senators were one of the original 8 franchises in the American League in 1901. That specific franchise left in 1960 and became the Minnesota Twins. They were replaced by a new Washington Senators franchise as part of MLB's 1961 expansion which also included the addition of the Load Angeles Angels.

The franchise now playing as the Nationals entered the National league in 1969 as the Montreal Expos. The Expos were the first MLB franchise in Canada. The early Expos teams were characterized by the development of a number of future Hall of Fame players such as: Andre Dawson, Gary Carter, Tim Raines, Pedro Martinez, Randy Johnson and Vladimir Guerrero. The franchise struggled with low attendance and only reach the post season one time - 1981. In 1981, a season interrupted by a strike, they lost to the eventual World Series Champions the Los Angeles Dodgers.

Nikco Sports is helping mark the Washington Nationals first National League Title and World Series appearance with an exclusive, fully licensed, Rawlings 3-ball set with a display case. The 3-ball set and case costs $99.00 + S&H, and will be a limited edition issue with only 5000 being made.

Nikco has an extensive inventory of Washington Nationals memorabilia and autographed collectibles. There are autographed photos, jerseys and baseballs from several Nationals' players players.

Home Page of the Washington Nationals 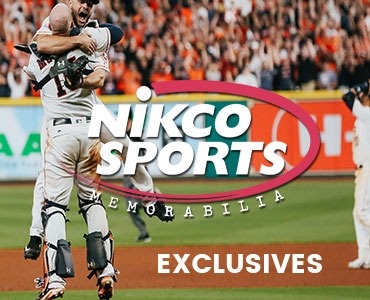 We promise to only send you good things!