The Chicago Bears played their first professional season as the Decatur Staleys in 1920. The Staleys joined the American Professional Football Association, later known as National Football League, on September 17, 1920.

George Halas was the Staley team representative when they joined the league, and in 1921 the Staley Starch Company gave Halas the team, $5,000 and the right to move the team to Chicago which he did right away. The Staleys were runners up in the league's first season finishing with a 10-1-2 record. In 1921, the Chicago Staleys claimed their first league championship.

The team changed its name to the Chicago Bears for the 1922 season and proceeded to be league runners up for 3 straight seasons - 1922-1924. The Bears won their second league championship in 1932.

In 1933, the Bears won the NFL's first championship game 23-21 over the New York Giants. Prior champions were crowned based solely on their regular season records.

The 1940s started with four straight NFL championship appearances by the Bears who won three, including a 73-0 annihilation of the Washington Redskins in 1940. The 1950s represented a frustrating decade for the Bears. They consistently enjoyed winning records but the NFL title was elusive, and the Bears made only one playoff appearance. The Bears broke a 17-year championship drought with a 14-10 win over the New York Giants in 1963.

George (Papa Bear) Halas was a constant and dominating presence in the franchise for a 64-year period between 1920 and 1983. Halas served the Bears as an owner, player, coach, general manager, traveling secretary, and in virtually every other capacity imaginable. When Halas retired after the 1967 season, he ranked as the all-time leader in coaching victories with 324, a record that Don Shula broke in 1991.

In their first 74 years, the Bears compiled a 586-384-42 overall record. Chicago qualified for the playoffs 21 times, won 19 division titles, eight NFL championships and Super Bowl XX. The Bears enter the 2019 season as the NFL franchise with the most wins, most games played, and they own the second highest franchise winning percentage.

The Bears celebrate their 100th NFL season and are among the last two franchises to join the league in 1920.

Nikco Sports is helping mark this momentous 100th season of Bears football with an exclusive, fully licensed, Rawlings full-size football. The Bears 100th Season ball costs $99.00 + S&H, and will be a limited edition issue with only 2019 being made.

Nikco has an extensive inventory of Chicago Bears memorabilia and autographed collectibles. There are autographed photos, helmets, jerseys and footballs from many Chicago Bears players. Among the players available are: Gale Sayers, Walter Payton, Dick Butkus, Michael Trubisky and many more.

Home Page of the Chicago Bears 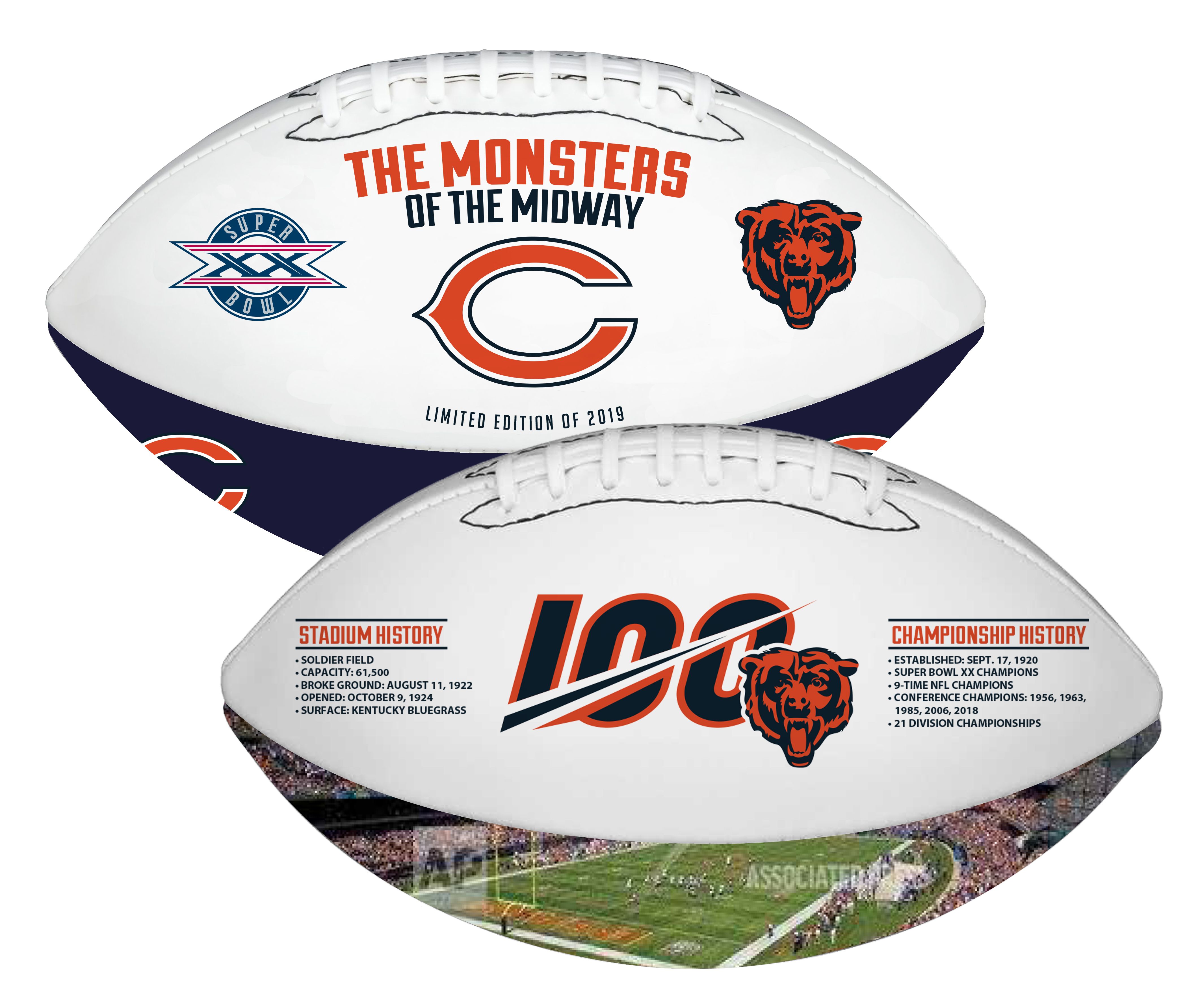 Sign up for exclusive email offers, limited edition, autograph opportunities and much more.